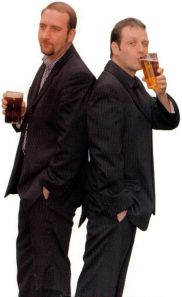 Since Mark Radcliffe and Lard started on the Breakfast Show the listening figures had always been going down. It wasn't really their fault, the numbers started dropping before Chris Evans left. When he was replaced by two Northern tosspots that most people had never heard of, the numbers were bound to go down even further. After 6 months on the Breakfast Show Mark and Lard agreed with Roger Bannister that it would be best if they left the Breakfast Show to be replaced by Zoe Ball and Kevin Greening. They got the 2-4pm slot which is known as The Early Afternoon Show, and that is where they are today. This is the show broadcast live from Studio 5 of BBC Manchester. Mark is allowed to pick 4 tunes of his own choice for each show, the rest must come off the Radio 1 playlist. It won the 1998 and 1999 Gold Sony Award for the Best Daytime Radio Show. Recent figures show that Mark and Lard's audience has recently gone up to 5.3 million, up by half a million in one year. On 19th February 2001 their show moved to the 1-3pm timeslot.

One Man & His Frog

Only Slightly similar to One Man and His Dog. A frog handler demonstrates his frog's abilities around an obstacle course while Mark narrates. Frogging expert Scroff Crudle is there to give his expert opinion on the events. Frogging used to be a male only event, but at this years Annussol it has been made into a mixed event. The Annussol is the most important event in the frogging calender, followed closely by the Pepto-Bismol.

A rare press photo from this years Annussol

The 1999 Annussol started on the 21st June and was a big success. The winner was Frarge Boffle-Nurp.

Mark and Lard choose a current news story and you can phone in suggestions for related records. From this they compile a Top 10 list, the top 3 get played on the show. Phrases often heard in the CCCC include:

Lard makes a wind up call to a member of the public. Unfortunately for him the 'victim' always seems to realise that it is Lard who is phoning them. His Jingle goes "He's the cheeky wind up scampster, and he's on the radio!"

News reports from the BBC which are very vague. These are great for people who want the news but aren't bothered with dull details. 'North West Tonight' news presenters; Martin Henfield, Nigel Jay (The Jay Report) and Deborah Hawkes have all done presenting duties on this item.

Dobbins Or Bobbins - A telephone quiz first done on The Breakfast Show, where people have to guess if the names they are given are a Horse's name (Dobbins), or made up (Bobbins). They £5 for each correct answer. It's introduced by Cornelius Lycit. Amazingly they had a clean sweep on the very first one. The top prize is to have a race named after you at Haydock Park.

Two Peas in a Pod- Music knowledge telephone quiz for two participants who are given the names 'one pea' and 'two pea'. If they know out the answer to a question they have to shout out either 'one pea' or 'two pea'. They get £5 for each correct answer.

Pigment or Figment - Telephone quiz where the participant has to say is a colour is actually a paint (pigment) or if it does not exist (figment). They get £5 for each correct answer. Gordon Burns (who is a news reader for Northwest Tonight) does the intro jingle for this quiz.

Flick Or Trick - Phone quiz where people have to say if a film really exists (flick), or if it is totally made up (trick).

Plant or Pant - Similar to Flick or Trick, but you have to guess if a word is a plant (green thing that grows in ground) or if it a pant. (This does not mean y-fronts, it means that it is not a plant). The top prize was to have a petunia named after you.

Group Or Poop? - Totally different to Pigment or Figment. The telephone contestant has to say if a name is a band name (group) or a made up name (poop). You get £5 for each correct answer. Mark has perfected his pre-quiz chit chat into an art form. eg.

I've heard about a Scrawn & Lard Website but don't know if it's worth investing the price of a phone call to look at it. If only I knew someone who had seen it.

Blimey! Lard fire up that computer and get us hooked up to the fishing net post haste!

The Crap Town Factor - A telephone quiz where the contestant has to say if the names of certain towns are "On The Map" or a "Load Of Crap". They get a £5 Costly Disc token for every question that they get right. The Crap Town Factor music is a version of Wheezer's 'Buddy Holly' from 'The Moog Cook Book'

The Spice is Right - The participant starts with £50. They are then asked 5 questions and lose £10 for each one that they get wrong. The money is supposed to be used for a meal out. This quiz is only done on Fridays.

It's A Mystery - Each day a penniless social misfit is given the chance of winning £5 if they can identify the mystery voice. No one ever seems to guess the correct identity. When they are given the answer they always respond with a big WHOOOOOOOO!

The Adventures of Slim and Shady - The adventures of the two little woodland squirrels. It is the Afternoon Show version of Nut Chip Chirulduck as featured on the Graveyard Shift.

The Radio One Antique Roadshow- This is the antique spot which takes place in the BBC canteen during the show. It usually seem to feature some loud-mouthed old person who is eager to make a fast buck.

Dick The Buttock Scruttock Sightings- People can report their sightings of 'Dick' to the show. Dick is one of Lard's close personal chums.

The Mark Radcliffe Show - A TV show within the radio show. Like the Jerry Springer show they discuss burning issues of the day, except that it has a different name.

Beat The Clock - A contestant has to guess what song is playing. When the contestant knows what the mystery tune is he/she must shout "Stop!". If the answer is correct then he/she wins one pound for each second of the song that is remaining.

Otto & Otto - The German radio show who are competing with Mark & Lard, Mark & Lard often tune into the show to see if they are still, "Skinning Otto & Otto Alive!".

Answers To Listeners Questions - Mark answers listeners questions, but he does not tell us what the question is.

Workers Tea Break - As many workers do not have a proper break in their day to relax, Mark & Lard have set up Workers Tea Break to give all workers listening to the show a chance to relax. They phone up a place where the workers are having a break to make sure that no one answers the phone.

Where Are They Now?

- Lard's feature which was previously heard on Hit The North. He tells us about a band or singer and wonders where they are now; usually at the top of the charts and selling millions of records as Mark has to point out to him.

Hat Wearing Listeners - Listeners are encouraged to wear a hat whilst listening to the show, by doing this they have a chance of getting their name read out.

If you have any comments or suggestions then please email me