The Shirehorses are Mark & Lard's great Rock N' Roll band. Although they may not be well known they have been hugely influential in the music scene. Everyone from David Bowie to Oasis to Placebo has 'borrowed' songs off them. They have released one album and their second album titled 'Our Kid Eh' was released on the 14th April 2001. 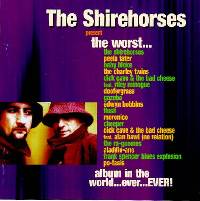 You can buy The Shirehorses - The Worst Album in the World... Ever... Ever! and their new album Our Kid Eh from Amazon. Plus in ten years I may even get a few pounds out of them!

The Original Line Up

Pat 'Evil Pixie Mastermind' Gallagher has appeared on stage with the Shirehorses on the Blur dates & on all the Mighty Horse gigs, miming the sax. On Mark's birthday and the Radio 1 Cardiff bash Chunky was replaced by Sickly Rob.

On 27th June 1997 The Shirehorses played Glastonbury. They had tried to keep it a bit of a secret but it got out into the papers several weeks before the event that they would be playing some of their piss take tunes at the 1997 Glastonbury festival.

Picture the scene - it's 10.30am on a Friday morning. The rain is lashing down, and all the campers are knee deep in mud. Some of the hardy ones brave the elements, and make a brief pilgrimage to the second stage. For a while the rain stops, and an ery quietness overcomes the vale of Avalon that is Glastonbury. All quiet, that is, until the 'Flight of the Valkyres' starts up, and two men, dressed in red fleaces, shorts, and Manchester City shirts fly onto the stage.

"Rock and Roll!!" they cry, as Picknose the Producer and Paddy (evil pixy mastermind) also arrive and pick up their instruments. They leap into a blistering epic of 'The Seahorses' 'Love is the Law', followed by other classics such as 'Pants On - Plums Drop', and 'Gazebo - Lardy Boy', as well as a few new ones, such as 'Oasis - Roll With It' ("I want a roll with it, I want a chicken pie").

Is it any coincidence that after they had been on the stage it sank into the mud?

Thanks to Mathew Wood for sending this account in.

In September 1997 the Shirehorses did a tour of the following Universities.

Shirehorses We Came, We Saw, We Cantered Tour

All the shows were compared by Peter Kay who is the winner of the Edinburgh "So You think you're funny Award" except for Thursdays show which was compared by Mark Lamarr. Their road manager was Ian Gatts.

The support acts are in brackets.

Shirehorses On Tour with Blur

The Mighty Horse's Last Ever Gigs

Maxim (December 97) - The Shirehorses The Worst Album in the World. . . Ever (EastWest)
F***in' hell, save us from Mark Radcliffe and Lard murdering a bunch of pop classics you're proabably thinking (for 'tis they). But this cross between Jilted John and Chubby Brown featuring Radders and Lard's alter egos from Baby Bloke ("You're Gormless") to Po-Fasis ("Cum on Skweez me Boils") will soon have you reaching for a dry pair of undies. Among the laughs are classics from Doofergrass ("Feel Like Shite": "We are old, we're clapped out, we're infirm, muck about, smell of wee, support tights, feel like shite. . .") and Peela Tater ("Ta La": "Lamb jalfrezi and 15 pints of lager, sends a message to your arse"). Not one to grace your stereo indefinitely, but great fun while it lasts.
Rating:*** (out of 5) written by Adam Sutherland

C4 Teletext - "The Worst Album In The World . . . Ever
Horsing around? The Shirehorses are in fact DJs Mark Radcliffe and Lard and here they attempt their own versions of poprlar tunes. Baby Bloke's "You're Gormless", Peela Tater's "Ta La", about the after effects of a curry! And The Charley Twins "West Country Boy". Shire Straits? The lyrics are funny but you can't really listen to them more than once as the musician ship is appalling. A good one-off joke."
Rating:***

This interview appeared in the September 1997 edition of Sky magazine on page 18.

The Shirehorses seem to split up and reform on a regular basis. They were both now in a new band called The Indeciperable Boys and played in The Mighty Horse (A Shirehorses Tribute band). Mark also plays in a more serious folk band called The Family Mahone.